Your Fish of the Year

Happy almost New Year everyone. I'm curious what everyone would call their favorite fish of 2021, if you had to choose just one. Mine is probably this monster (relative to the size of the stream I caught it on) brookie. Definite pool boss, I was shocked when I pulled it out of a small blue line, up in the mountains. Man I love Pennsylvania. To that end, I caught it on a green weenie. Here's to 2022.

I'm going with a LL for my second year in a row just bc this was a fun fight and it was a really rewarding fish. Hooked up at last light, and by the time he was in the net after a good handful of runs it was dark as hell. Lots of anxiety. (Also nursed him back to health at the mouth of a cold feeder stream for like 15 mins, so I felt like we had a moment.)

Actually, though, I want to give a shout-out to all the dinky wild fish that helped me unlock some new tiny stream techniques. That fishing made my year. 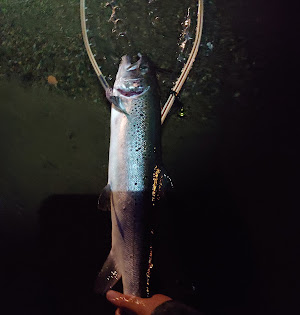 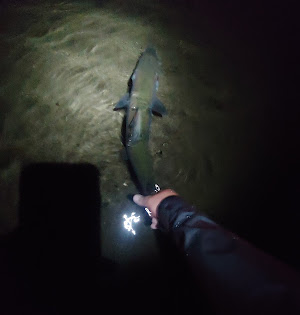 Well, I've bragged enough about this trout, but I will mention it's among my top ten best in 40 years, at 11". Caught August 27th.

Protect the resource, let them go.
A

I flyfish because I enjoy it.

Probably for me was this 21"ish brownie on Penns during the Drake hatch. Glad Mo was there to take the picture. 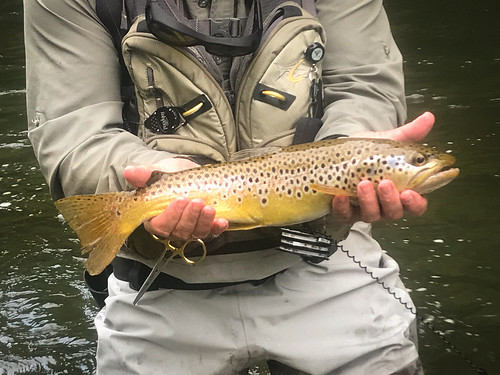 I had perhaps the best trout fishing year Of my life this year. So it’s hard to pick one fish of the year. But this fat bow waving goodbye when I went to take a photo and instead took a slowmotion video was probably it. A shade under 20”, but took me for a ride before I finally got below him and scooped him. I was sure the barbless sexy Walt’s nymph was going to unbutton.

Other honorable mentions: a beautiful 19” wild brown I took on a cicada fly of my own tying. A nice 21” brown on a trip with a buddy of mine to his private stretch of water. A dime bright coho on the swing in the salmon River. And my first ever golden rainbow, caught on my birthday to give me the stocker grand slam for the day.

Numbers, variety, size, and some unique fishing like the cicada hatch made for an awesome year. I capped it last week with a big rainbow that tossed my barbless hook after 3 big leaps. Something to shoot for in 2022.
K

I re-habbed my grandfathers old bamboo rod from the 1940's and got a nice rainbow
Also took my dad's old Fenwick glass rod to Erie and landed a couple steelhead.
these were the special fish -

dkile wrote:
Probably for me was this 21"ish brownie on Penns during the Drake hatch. Glad Mo was there to take the picture.

Yes a dry. I had been watching it for about an hour. It was only two feet off the bank and way down to the left of me. A difficult casting spot because fo the distance for me to get the right drift. I think I missed him once and then got him about 20 minutes later.

It was a great day. We didn't catch a lot of fish, but a hell of a lot of fun.
"One man’s plague is a another man’s hatch" - Bruno
Twitter Instagram FaceBook

Caught my fair share of big ones this year

I was fortunate enough to stick a few in the 20s this year, but I narrowed my most memorable down to two. The first one below was the second over 20 caught on the same day in June, and the second fish was caught in May. All caught nymphing. The second was a fish I lost in the previous winter and based on girth thought was my new "white whale" because it was so fat and powerful... 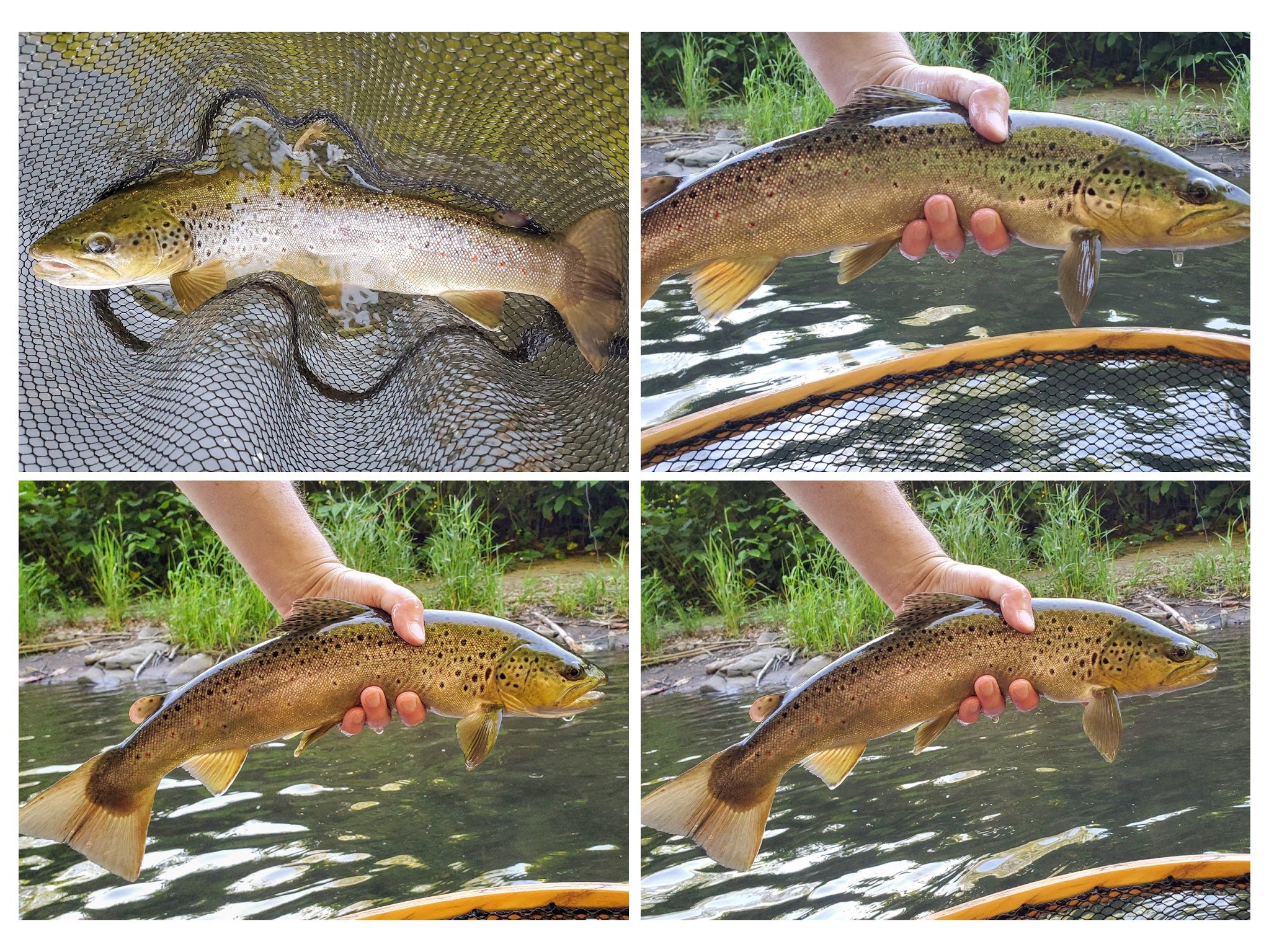 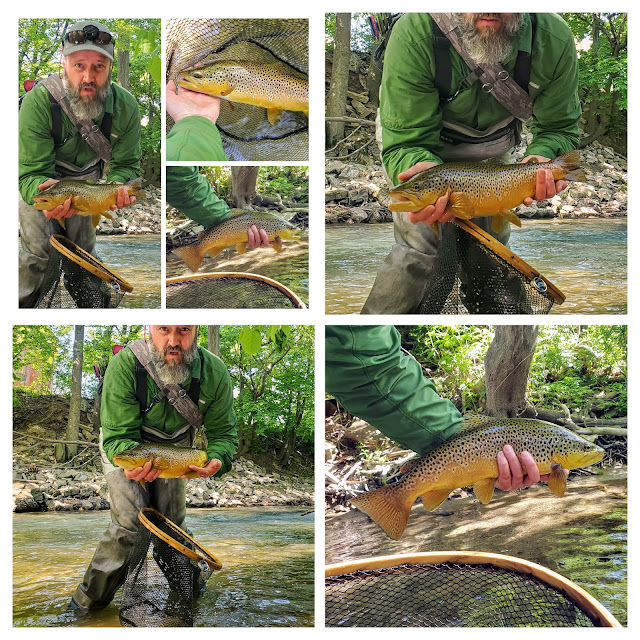 Not the biggest, but the best fish of the Year because the geographic location of the stream.

Jealous. I had a pile of fish between 18 and 22 this year but I don't have one that stands out for difficulty, fight or coloration. Good news is that 2022 is right around the corner.

I did have a client who threw a D&D late in the day and a brown in the mid - upper 20's slammed the fly on the first strip. Hit it so hard, the fly went 2' into the air. I screamed at him to cast again because the fish was still there..... He lowered the rod, looked at me and said, "that is the coolest f***ing thing I've ever seen". He just sat down and grinned for 10 minutes before getting back to it.
Deadbeat Hero

Great to see so many different fish. We're lucky in PA!

during the drake hatch , i was trying to meet up with DKile and maurice.
i drove around for an hour or so,looking for them, in the area of their campground,up and down dirt roads,gave up,parked at their campground and waded downstream from the bridge.

holy wowsers! it was insane. pretty much impossible to NOT catch bruisers.

dry fly fishing was a little to easy,. as long as a fly was large, it didn't matter what it was,where it was,or how it drifted,they hit it,HARD.

so,after what seemed like a hundred fish(but was probably less than 24) on dries,i moved up to huge soft hackles fished upstream.

so,my first brown out of them had to be my fish of the year, it made the bruisers seem like minis.

there's also SMB there beside the trout,who knew?

dkile wrote:
Fred and Nymph-Wristed, those are some nice collections for the year. Well done.
Click to expand...

Thanks, Dave! Nice fish yourself. I too wish I had a Mo along to photograph the first one!
sickdaysfishing.blogspot.com

One from Penns. Not huge but he was tucked up so close to a rock and I finally got a red quill in position and he took it.

"You might be a big fish, in a little pond. Doesn't mean you've won, cause a long may come, a bigger one."

Another from West Canada Creek in NY.

"You might be a big fish, in a little pond. Doesn't mean you've won, cause a long may come, a bigger one."

Lots of these this year too!