Mid summer into mid autumn is prime time for small stream, warm water fly fishing. While this summer (2018) has, so far, been unseasonably wet and cool here in southcentral Pennsylvania, mid-June has traditionally been the time I start to look to local creeks for bass and panfish. The main game are smallmouth bass, rock bass, and red-breast sunfish. Many of these creeks also have largemouth bass, carp, fallfish, green sunfish, bluegills, hatchery trout, crappies, even pickerel and walleyes. However, red-breasts, rockies, and smallies are prevalent in most of the creeks I fish, with red-breasts ruling the roost. Green sunfish are equally widespread and sometimes are present in numbers best described as swarms, but they’re generally too small to target. 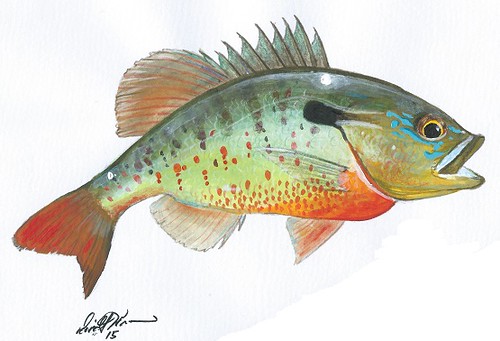 ​
Many fly fishers, if they’re not focused entirely on trout fishing, look forward to the summer bass fishing season. Wading or boating the Susquehanna or other bigger waters is indeed a great experience, but many of these anglers overlook the little local creeks close to home. While the rivers are a motivating place to fish in summer, if you don’t live near one, or otherwise are waiting for levels to drop and clear, something that can take several days after small streams have cleared, don’t overlook warm water creeks close to home. Most of these streams I frequent are typically twenty to fifty feet wide and comparable to what I’d consider medium sized trout creeks that one would fish with a 4WT.

Many of these streams are downstream sections of Approved Trout Waters. Agricultural valley streams can be productive too. Some are tributaries of bigger rivers and may play a role in bass spawning in springtime. One thing to note about access: land owners whose properties these creeks traverse, are often less familiar with anglers on their property as landowners who have trout waters on their property. Nevertheless, I have found that, if you ask nicely, you are likely to get permission. In my experience, streams with some gradient and traditional riffle to pool structure fish better than slow-moving waterways, which are often soft bottomed and tough to wade. These streams with current also hold more and bigger fish, especially red-breast sunfish.

This is simple fishing. For gear, I usually wet wade these creeks as they often fish well at mid-day during the summer. I recommend long wading pants rather than shorts as these streams often have dense vegetation along their banks and lack trails due to lack of fishing pressure. Spare your legs and wear pants or waders. I usually use a 7WT fly rod but trout gear is fine and sometimes I’ll use one of my tiny, five-foot brookie rods. Normally I like bigger sticks since I’m roll casting big flies and big strike indicators. Basic poppers and nymphs cover most bases. Plain old Wooly Buggers or Clouser Crayfish are deadly too. No need to go fine on the tippet. I almost never go lighter than 10lb test line and often use 12-14lb test. Stronger tippets will allow you to rip flies out of vegetation.

These streams often hold very dense fish populations, although not typically large ones. One of my favorite local creeks that I’ve fished for decades has produced countless smallies for me, but the biggest I’ve ever caught there was fifteen inches. Creeks are a numbers game with respect to bass. Sometimes a big smallie, or even a largemouth, will show up, but these are rare. While smallies are the main bassin game, there is another favorite creek of mine that, for some reason, has far more largemouths. Rock bass are often present too. Look for rockies around woody cover in the slower, deeper pools. Smallies and red-breasts are more likely to be in the main channel under current where chunk rock is present. In my experience, rock bass are less likely to rise to poppers and are much more susceptible to being caught on nymphs and streamers. Ditto with red-breast sunfish. You’ll get plenty on top, but if you’re mainly after these panfish you will probably get a lot more of them subsurface. Sometimes I’ll fish upstream with a popper and catch bass. On the way back downstream, I’ll fish subsurface with a buggy nymph or small crayfish pattern and slay the sunnies and rockies. Oftentimes, you will find a particular big rock or log that always seems to hold fish and you can pull multiple fish out from around or under it. Such hotspots usually remain productive year after year.

I’m convinced that the fish in these creeks are seasonal transients. This varies and I know some creeks where bass winter over. However, in most of the creeks I fish, the bass and sunnies usually migrate out in autumn, sometime around first frost. By this time, it’s time to go elsewhere and I switch to the big rivers or trout fishing. In the springtime, usually by late May or early June, the bass and panfish return to the creeks. Prime time is July to September. Some years with low flow conditions in springtime, such as 2016, I seem to find fewer bass and panfish in these creeks in summer. Better flows seem to pull more fish up into these creeks. I have found small bass and sunfish in the tiniest of creeks, some just a foot or two wide that dry up in warm years. These creeks aren’t worth fishing, but it is testimony to how far up into the watershed these fish can migrate.

Don’t overlook small streams in summer for easy going fly fishing. You can catch dozens of hard fighting fish in an afternoon and often some decent sized bass in the eight to twelve inch range. Many of these creeks rarely see an angler – maybe some kids with inner tubes and fishin poles. If you have a kid or a dog, bring them too. If you’re lucky, you’ll find a creek filled with scrappy bass and red-breast sunfish - a great way to spend a hot, lazy summer day.

You can see more of Dave Weaver's great artwork at www.rodandbrush.com