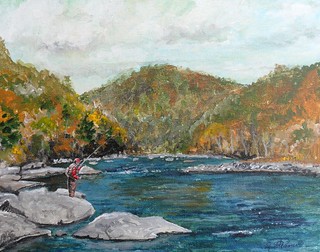 Below Ramcat Run (acrylic on canvas)
article and images by
Dave Weaver (Dave_W)
​
Large Pennsylvania streams and rivers in October and November can provide an interesting grab bag of fish that might munch our flies, and big weedless streamers are the way to go. For many Pennsylvania fly fishermen, October and November are months when they return to stream trout fishing, if they ever left. In particular, years such as this one magnify this effect as we have spent what seems like many months waiting for rain and cooler temperatures and are especially eager to get back out for trout. Some fly fishers gave the river bass game a go-round during summer, but soon are back on trout streams as the days get shorter and colder. Few die hard fly fishers stick with bass by late October. Try checking out a mid- sized or larger bass river in late October: a fly fisher is a rare sight.

Spin fishers, by contrast, know that late autumn fishes well on the big rivers. Bass are still active and walleyes, pike, and muskies are on the prowl. In addition, many of the larger streams and mid-sized rivers have transient populations of large, wild brown trout in the “transition zone” – that is to say the lower reaches of what normally passes for trout water (or where it is stocked) that transitions into a warm water fishery. These fish drop back downriver during the autumn, or migrate out into rivers from colder tributaries. To be sure, these trout are hard to find, cagy, often nocturnal even in colder periods, and are a specialized game. Nevertheless, they are part of the mix. Some very large browns fall to spin guys fishing tubes and swimming plugs for bass and walleyes during the colder months here in Pennsylvania every year. 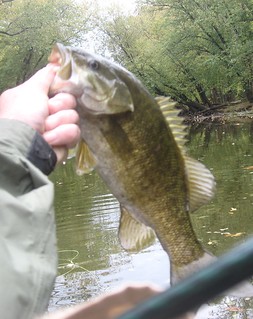 Chances are, there are some big rivers near you that you might consider fly fishing in the coming weeks. Larger tailrace rivers such as the Delaware, Potomac, Lehigh, Youghiogheny, or Allegheny have trout in their upper reaches, but gradually these rivers transition to warm water species downriver and are associated with smallmouth bass, walleyes, and muskellunge. With colder temps in autumn, large trout will sometimes migrate downriver into these areas associated with warm water fishes.

Larger trout streams or “creeks” such as the Little Juniata, Frankstown Branch, Raystown Branch, Swatara, Mahoning, Clarion, Schuylkill, Tionesta, Shermans, Conodoguinet, Penns, Pine, Shenango, and other similar streams all are popular for both bass and trout. Moreover, about half of these creeks have muskies or tiger muskies. Smaller waterways such as these are prime spots to target bass, trout, and even muskies in late autumn. Even the West Branch Susquehanna is coming to be associated with stocked trout in its upper reaches these days in addition to its much-improved (now superb) warm water fishery downstream.

On waters such as these during the late autumn colder temps and shortening days put big river smallmouth bass in an aggressive mood. Big browns, and muskies are on the prowl as well and they’re not looking for a size 18 dry fly, they want a meal! Chubs, fallfish, shad, suckers, big sculpins, madtoms, and shiners are on the menu and these baitfishes have had a season to grow and are large, typically several inches in length and often much larger. This is the time of year to throw big streamers with at least a six-weight rod. Oftentimes, an eight- weight is better. A floating line works fine although if you’re working deeper rivers with current, a sinking line will get you in the strike zone. 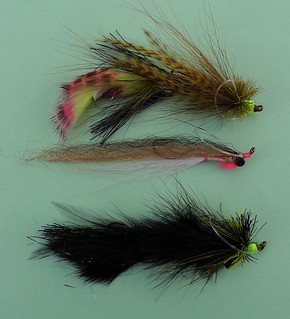 Any large streamer can work, but I like articulated doubles using soft materials and deer hair. Clip the hair in a large spun head that pushes water. Deer hair can make a fly more buoyant and wind resistant, but such sparse, spun deer heads also produce a fly that has a nice side to side, erratic swimming pattern when stripped and stopped. This side to side swimming pattern is deadly. Generally, for this game I like flies in the four to seven-inch range or larger if you’re hoping to target toothy critters. Twenty-inch brown trout, or smallies in the mid-teens, are fish that can easily inhale and swallow six-inch prey species. I like double hook flies since trout and muskies often seem to seize the fly mid body and often need a trail hook for solid hook-ups. Bass, by contrast, only need a single hook at the front of the fly for good hook up ratio as bass are head hunters. Colors are a matter of preference, but the old wisdom about “dark day, dark fly” holds true in my opinion. Black and chartreuse is tough to beat in stained water.

A major challenge to this season is leaves and weed break-up. In late September, many rivers see a break-up of grass beds and this results in a lot of junk in the water column. By early October, much of the weed break-up is done, but leaves start to foul the water column by mid-month. By late October, leaves can make fishing nearly impossible in some places, especially on windy days. To contend with this, you will want a fly tied weedless so as to pull through the leaves. The flies depicted here are examples of typical streamers I’d reach for on autumn rivers. The key is a decent weed guard design. I prefer mono loops tied in at the hook eye, as can be seen. For larger patterns such as these, fifty pound mono works best. I generally put a weed guard only at the lead hook and not the trail hook. You’ll still catch some leaves, but weed guards will at least allow you to fish fairly effectively where conventional flies would immediately foul. Experiment and find a design that works for you – just keep the fly at least four inches long. Bigger is better.

October and November are great months for fly fishermen in Pennsylvania. Target the transition zone on larger creeks and rivers and you will have a genuine shot at multi-species if you throw big streamers. To be sure, smallmouth bass will be your most likely catch, but large brown trout and muskellunge are out there too. Just the other day, I was wading a favorite pool on a mid-sized creek and could see a brown trout, a three-foot-long muskie, and several smallies in the mid-teens. . . all within casting range. Catching all three species in a day would be uncommon in my experience, but the possibility exists if you’re at the right time and place. So, tie up some big weedless streamers and get out on a big creek or river this fall. The trout guys will be nowhere in sight and many of the summer bass fishing regulars are sitting in a tree stand. You’ll probably see few anglers. Double haul that big streamer out, strip it back through the leaves, and hold on when you see that big swirl or feel that pull. You may even have to fight the fish to surface before you’ll even know what chomped your fly. A motivating experience during a great time of year!