Going to be a Dental Floss Tycoon a Montana Trip Report

I figured it appropriate to name this trip report after one of my favorite musicians' work (Frank Zappa) and since this was in fact a mini recon trip on “moving to Montana soon”. The trip was with my lovely girlfriend Rachel to Bozeman, Montana, and the surrounding areas of Southwestern Montana including several of the large Gold Medal rivers and a handful of smaller lesser known tributaries. The plan was to camp at five different locations for a total of seven nights in the mountains and two nights in Bozeman proper giving us ample time to explore the area hiking and fishing as well as soak in some of Bozeman (which really means soak in a bunch of good beer). 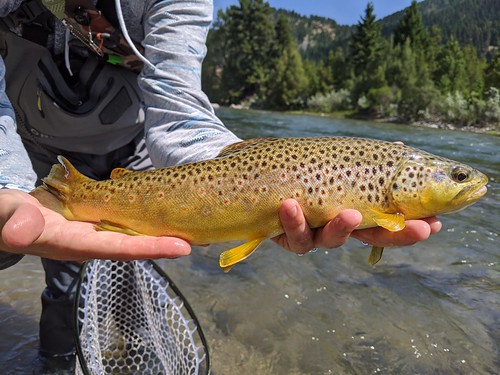 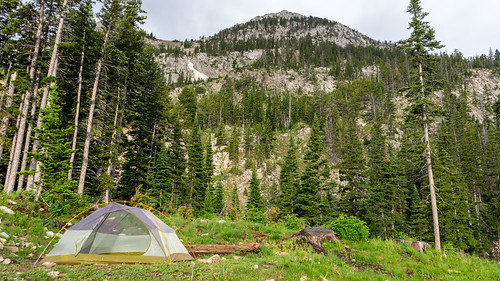 ​
We left Pittsburgh early Wednesday the 22nd and arrived into Bozeman around noon their time after a nice and stressful airport travel day. We rented a Toyota 4Runner and it was nothing but a dream the whole trip. If you’re on the fence on what to rent out there, opt for the full-sized SUV every time. We immediately headed North towards Fairy Lake and it really only ever takes about five minutes out of the terminal for me to remember why I love the West, the mountains are instant and the views incredible. After a ~45minute drive we arrived at Fairy Lake and found a site at the free campground just above the lake. I was able to sneak in an hour or two worth of fishing and landed my first ever Yellowstone Cutthroat on a size 16 gold chubby. My girlfriend and I had a really nice time pestering fish with chubbies and hoppers until the rain chased us back to camp for a light dinner. I’ll add that this night was the worst camping experience I might have ever had. The wind and rain was so strong that our tent pulled off the stakes and shifted a little around us and I might have woken up a dozen times or more. All in the pursuit right? 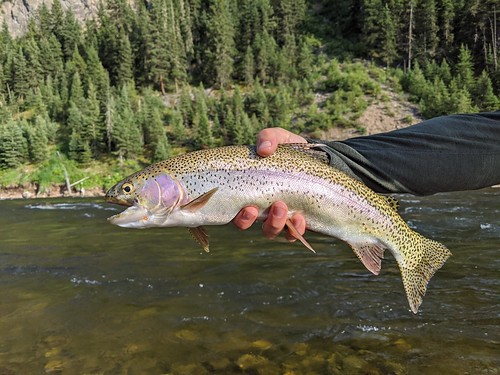 ​
On the first full day, we hiked to Sacagawea Peak which is worth spending the time (and energy) doing if you're in the area. It’s about 2000’ over about 3 miles so it sure is a hike, but well worth it.

The following day we were supposed to hike the Fairy Creek trail but the rain was threatening again so we decided to pack ship and head to the Gallatin area and boy am I sure glad we did. People talk about the Gallatin as having small fish and it’s just a stop along the way but it was more like a Penn’s Creek to me. It had lots of deep runs and riffles and some pocket water too and really reminded me a lot of the section above Cherry Run. Not to mention this first day on the Gallatin was good, I mean really good. I broke off what might end up being my largest river fish of the year and landed some extremely gorgeous browns and sizable wild rainbows. The fishing combined with the views you get makes you instantly forget you’re next to highway 191 where trucks are doing 70+. Rachel landed a nice rainbow on a chubby and was thrilled to begin to get a hold on this fly fishing thing, she’s even asking for her own net now too! We fished a little of the Gallatin again the next day but the real prize was just to the South through the resort town of Big Sky but just before West Yellowstone, The Madison River. 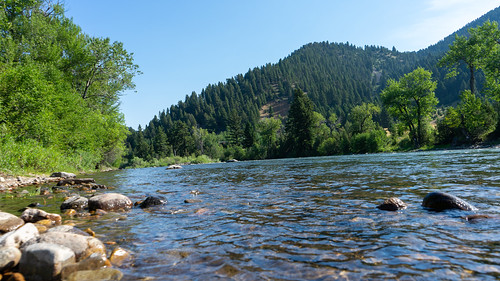 ​
We decided to set up camp first then try to catch the afternoon and PM bite down between the lakes. I chose this spot after talking to some people who said it is deeper in this area and more nymph friendly and since tight line is my strong suit nowadays it was an easy decision. Once we rumbled down the pitted dirt road we were met by the gorgeous valley views complete with Golden and Bald eagles soaring and chittering overhead. I’ve still yet to see one catch a fish so that is still on the bucket list but we also saw a pelican which was pretty cool (you’ll note in the pelican photo there is a pink innertube in the rear of the photo, a mother and her teenage children tried to “float” the Madison, they didn’t make it far). 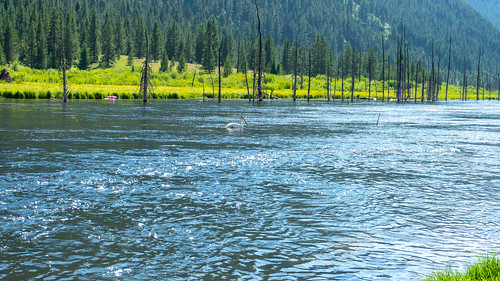 ​
The fishing on the Madison was much tougher with my dry fly action coming on rusty spinners and caddis while Rachel was able to raise fish bank-busting on yet again a chubby in peacock and gold variants. The bug activity was small but there were PMDs and caddis zipping around and you could hear lots of terrestrials buzzing in the grasses but none came to the water even with the wind gusts. I also did decently well nymphing taking fish on a double bead stone, thread body nymphs, and the dreaded mop. The water here was no joke and not for the faint of heart. It is cold and it is fast so fishing it was a little sketchy at times but the bottom is a gravel substrate so no big surprises while wading thankfully. I landed some nice rainbows, a fairly large cutbow and please hold your applause, my largest whitefish ever! I ran downriver for that fish and my girlfriend will never let me live it down, that’s ok whitefish unlimited for life. While we were in the area we hiked up Cabin Creek which is one of the last remaining strongholds of the Yellowstone Cutthroat in the Madison River drainage basin with 98% of them residing in the upper reaches of the creek. The upper stretch was essentially isolated from downstream invasive rainbows by a series of steep waterfalls when the earthquake occurred in that area and they also constructed a fish wall to further prevent access. I didn’t fish it as we were just hiking but I wish I did because it sure was beautiful, oh and we ran into a grizzly. No spray was needed, both parties just needed a change of pants. 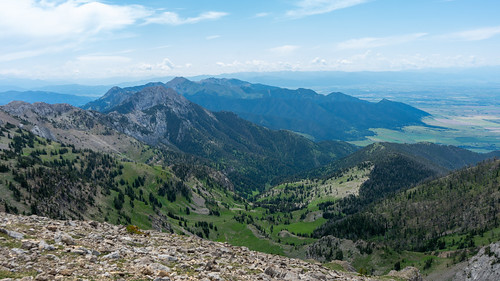 ​
On Monday we had our float rip scheduled with Fins and Feathers of Bozeman and our guide was Jake. He was the son of a Central PA transplant and had been out our way to fish so we instantly had things to talk about. The conditions were excruciatingly bad with a HOT high sun and not a cloud all day. We struggled to get eats other than willing whitefish eating Rachel’s nymph rig and the occasional small dry eat. We were able to drum up a little bit of hopper action though later where I landed a nice 18” rainbow and Rachel landed her personal best 16” wild brown trout on, you guessed it, a chubby. The Yellowstone was a gorgeous river though and had tons of great views making up for the slower fishing and the beer was cold too. 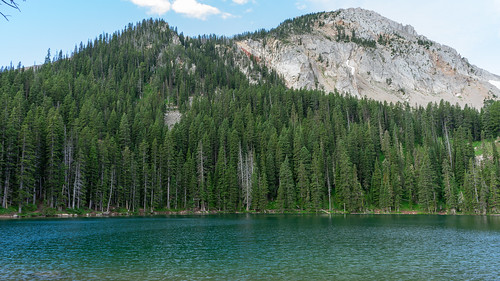 ​
Next up on the list for a couple of days was an area that many people recommended and that is the Hyalite Creek and canyon area. This turned out to be some of the most fun fishing and exploring I’ve had in a long time and while Montana may be known for the Gold Medal stretches and places like Three-Dollar Bridge don’t forget about the small feeder streams. It was extremely fun plinking 6-16” rainbows on a single caddis, I was at 17 fish (all rainbows) in two hours and some change before I stopped counting and the fish were in all the places you would have expected making it nice and easy too. If you fish that small drainage well you can in a single day catch a brook, brown, rainbow, greyling, and Yellowstone and westslope cutthroat. I was close just missing the westslope and the greyling and I sure tried getting the greyling out of the reservoir one of the days but just kept finding big Yellowstone cutthroat and beautiful brook trout. While we were there we checked out Pallisade Falls which is one of those Bozeman area must see type attractions. It’s just a short hike up a paved path, is ADA accessible, and worth visiting if you’re in the area with some family or just looking to fill some time. I’ll add that the camping options are very abundant in the Hyalite region and are extremely family-friendly. 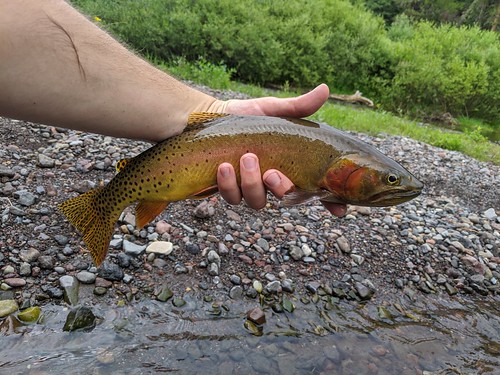 ​
The final day and a half were spent checking out the Bozeman area since it’s on our list of destinations to move to. We hit seven different breweries and checked out a couple of the smaller shops too. We got lunch at a phenomenal breakfast/lunch Mexican place called La Tinga, be sure to look them up if you’re out there and had dinner at the scenically located MAP Brewing. We also had a to-die-for meat lovers pizza called the T-Rex at Bridger Brewing that had not only bison pepperoni but meatballs and the best fennel sausage I’ve ever had (I stole a piece of Rach’s sausage and nearly started WWIII).

Overall we really liked the area but we didn’t feel a magic spark coupled with the fact that the population is rising quickly and housing cost is skyrocketing. Our next target is Missoula which we heard is a little more our speed and still fairly cheap to live in with great fishing nearby. The trip was a solid 10/10 though with great fishing throughout and tons of gorgeous scenery to be had. Montana was exactly what I expected and exactly what we needed with all the craziness going on in our own lives.
Click to expand...