Menu
Log in
Register
Install the app
You are using an out of date browser. It may not display this or other websites correctly.
You should upgrade or use an alternative browser.
Pennsylvania Fly Fishing 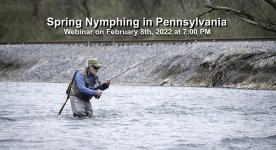 HARRISBURG - In announcing the most recent results of its ongoing investigation into an alleged mountain lion attack on Oct. 9, Pennsylvania Game Commission officials today announced tests conducted on a knife allegedly used by Samuel Fisher, 42, of Sadsbury Township, Lancaster County, were positive for human blood. The tests were conducted by East Stroudsburg University in Monroe County.
Continue…
Conservation
Continue…

STEELHEAD ARE ON THE RUN!

The Pennsylvania Fish and Boat Commission announced today that steelhead are officially on the run in Erie after the heavy rain experienced this week.

The steelhead run is timed perfectly with the launch of the Commission’s new website mapping feature, which allows anglers to locate Lake Erie tributaries to fish for steelhead, download directions to the tributaries, find places to park, and read the local fishing regulations. Check it out at www.fishandboat.com/steelhead. (Click on the yellow triangles for detailed information on fishing destinations and the Help icon for help information.)

In July and August of 2007 and 2008 Pennsylvania Fish and Boat Commission Area 6 along with other agency personnel sampled 10 different moderately-wide to wide (14-36 meters) warmwater streams in southeastern Pennsylvania to document the warmwater fish communities as part of a greater project that would eventually characterize warmwater stream fish communities throughout the state. Sample sites measuring 300-500 meters in length were electrofished at specific locations (segments) on each stream, which are listed in Table 1. Most of the stream segments were characterized as slow moving with few riffles and long pools or long glides. The majority of the pools were up to 1.25 meters deep, but pools were occasionally up to 2.0 meters deep. Streams sampled included those both in the Delaware River drainage and Susquehanna River drainage.
Continue…
Pennsylvania Fish and Boat Commission
Continue…

ALEXANDRIA, VA (August 28, 2008)  The winner of the national Take Me Fishing baseball sweepstakes is William Rocco of Reading, Penn., who beat out baseball fans from 32 other minor league and independent teams to take home the grand prize. Rocco and his family will be presented with a 17-foot Lowe boat and trailer during a special on-field presentation tonight at FirstEnergy Stadium.
Continue…
Fly Fishing
Continue…

The Pennsylvania Fish and Boat Commission (PFBC) is reminding anglers to report tagged smallmouth bass in order to help the agency with a population assessment on a section of the lower West Branch of the Susquehanna River.

The commission is currently conducting the assessment and an angler survey on about seven miles of the lower West Branch of the Susquehanna River from the vicinity of Muncy downstream to Montgomery, Lycoming County.
Continue…
Pennsylvania Fish and Boat Commission
Continue…

The Pennsylvania Fish and Boat Commission will hold its spring quarterly meeting April 21-22 at the Clarion Hotel in DuBois, PA.

Commission committees will meet beginning at approximately 9:45 a.m. on Monday, April 21, and again at 8 a.m. on Tuesday, April 22. The full Commission will meet for formal consideration of the agenda beginning at 1 p.m. on Tuesday. All committee meetings and the review of the agenda are open to the public. Attendance is encouraged.
Continue…
Pennsylvania Fish and Boat Commission
Continue…

ALEXANDRIA, VA (January 3, 2008)  The Recreational Boating & Fishing Foundation (RBFF) today announced that the Pennsylvania Fish and Boat Commission will participate in a direct mail marketing effort to increase fishing license sales. Twenty states have currently signed on to participate in the direct mail marketing initiative, a program designed by RBFF to increase participation in the sport and generate awareness of the connection between fishing license sales and conservation efforts. Only 10 open spots remain for states to participate.
Continue…
Fly Fishing
Continue…

The state may be named for Penn’s Woods, but autumn isn’t all about trees here in the Commonwealth – though that brilliant foliage does provide a beautiful backdrop for fantastic fall trout fishing, especially along 147 waters being stocked by the Pennsylvania Fish and Boat Commission (PFBC) in October.

The PFBC will stock 89 streams with 47,100 adult trout. In addition, 58 lakes will be stocked with 62,400 adult trout.
Continue…
Pennsylvania Fish and Boat Commission
Continue…
Top